Introduction
A harmful rumor caused by infection prevalence of Norovirus (NV) - Small Round Structured Virus (SRSV) which started last December attacked oyster fisheries resulting in reduction of production by 1/3 comparing to the same in an average year. Report says that they are endeavoring to obtain pickup in oyster consumption through the campaign works.
By the way, within the Japanese waters, cultivation of oysters, scallops, pearls and/or wakame sea weeds have been prevailing in the various bays, coves and nearby area of the narrow channels. We hope the following information will be of some assistance to our Members.

Where cultivation beds locate
The oyster culture prevails in Hiroshima, Okayama, Miyagi and Iwate prefectures and the scallops are richly cultivated in Hokkaido, Aomori and Miyagi prefectures. The pearls are produced in Mie, Ehime and Nagasaki prefectures. While the wakame sea weeds are one of the most popular production on the Japanese coast starting from Hokkaido to the Kyushu areas, especially the Sanriku district of Iwate prefcture, the Naruto of Tokushima prefecture and the Awaji-shima Island area of Hyogo prefecture are the well known farming areas.
The following illustration shows the typical area where the cultivation beds locate. 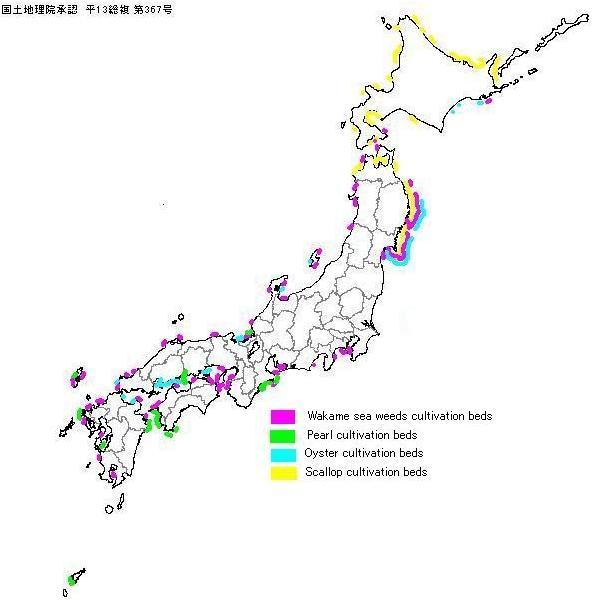 1.Direct Cultivation
Sowing baby scallops (either natural products or cultivated ones) into the shallow waters and leaving them as they are until the harvest. This method is introduced in the Hokkaido area.

2. Hanging Cultivation
There are two methods, namely, one is so called the "Raft Method" and the other is "LongLine Method".

(1)Raft Method (see picture and illustration No.1)
Rafts are usually set in the calm bay areas where is comparatively deep water. They are composed of cedars and bamboos, attached to the barrels or Styrofoam floats and anchored to the sea bed.
For the oyster culture, baby oyster shells attached to the scallops are hung down in the water by wires.
In the cases of cultivation of scallops and pearls, several baskets in which baby shells are put are hung from the rafts.

(2)Long Line Method (see picture and illustration No.2)
Aquafarms with long line method are usually set in the deep inner bays or open sea. Long lines are connected to plastic barrels or floats to keep buoyancy of long lines, and the both ends of which are anchored to the sea bed.
Three major systems of the Long line method are popularly practiced, such as single, double or combination systems, and the selection of which depends on the conditions of each fishery.
For the purpose of oyster, scallop and pearl cultivation, cultivating baskets are hung from the long lines.
Meantime, in the cases of cultivations of wakame/konbu sea weeds, seeded ropes are attached to the long lines. 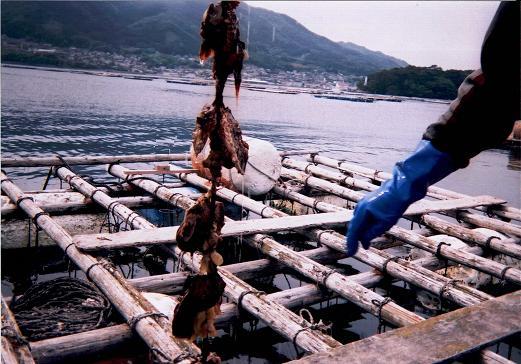 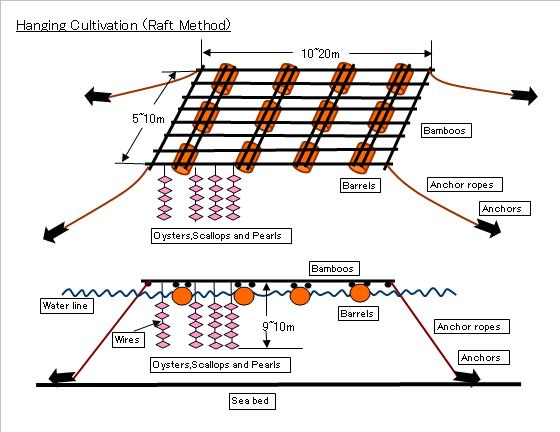 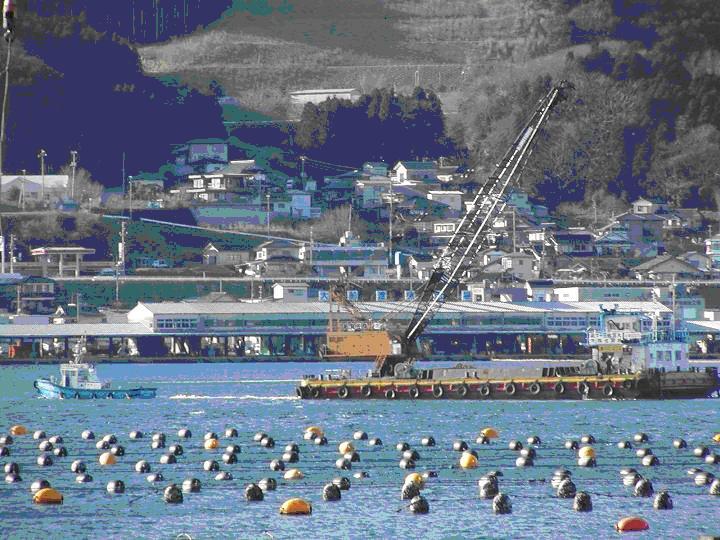 
How to do when entering into cultivation beds
In case of entering into oyster cultivation beds, though it depends on its farming period, a cost of 3,000,000 (2,600,000 for loss of income and 400,000 for repair) per one set of bed will be anticipated. An ordinary scale of fishery farm usually has 50 sets of rafts. If all of them suffer damages, the compensation necessary to be paid will amount to 150,000,000. Usually 5 to 8 rafts are connected together by wires, so, in case of the worst scenario where all components such as rafts, anchor ropes, wires, hanging wires and products thereon being lost, removal work of the wreckages by using large crane ship will be inevitable for restoration of the beds and it will cause incalculable loss.

When our Member unfortunately goes through the cultivation beds, please notify the fact to the nearest coast guard office, ship−s agent, fishery association concerned and JPIA. The Association will dispatch an appropriate surveyor if necessary.

If a ship's propeller is entangled in wires of the beds, it will be advisable not to attempt escape by ship−s own propulsion but to ask for assistance of salvors and/or fishermen. The effort to escape from cultivation areas by using a ship−s own propulsion may unfortunately enlarge damages.

Enlarged damages caused during the ship−s salvage operation will not be recoverable from the Association but from the hull underwriters.

We recommend obtaining information concerning the cultivating beds before you sail in the area in question and hope your ship's safe navigation!